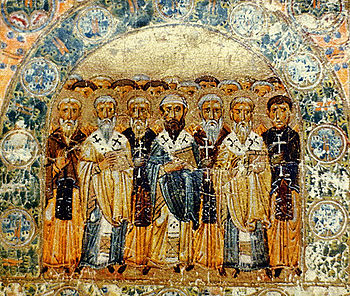 Studying the Early Church helps to give us contextual clues about the culture at the time around the New Testament. Furthermore, their understanding can help us clarify potential misinterpretations of New Testament passages. For example, the translation debate around pistis christou Romans 3:21 illumined by examining the fathers on the issue. People today want to debate whether the translation in Romans 3:21 should be “the faithfulness of Christ” or “faith in Christ.” It is extremely helpful to note that there are no early church fathers that interpret the pistis christou to mean “the faithfulness of Christ.” In fact, there is not even any debate about it. This is just one example of how studying the Early Church can help us read the New Testament.

2. Studying the Early Church Fathers helps us know how to suffer and deal with martyrdom.

The early christians dealt with suffering all the time. Their children had very high mortality rates. Many of the christians suffered the early death of a spouse. The Fathers knew that this world is passing away and therefore emphasized living for what things were important and eternal.

Nowhere is this more clear than in their understanding of martyrdom. Probably more than anytime in history, the early church was severely persecuted. Several Roman emperors made christianity not only illegal, but actively sought out Christians to torture (e.g., Nero used Christians burning on crosses to light his garden during a party). As our culture becomes increasingly hostile toward christians, reading how the early Christians handled suffering and persecution will become increasingly relevant, helpful, and encouraging.

3. Studying the Early Church Fathers helps us with personal piety.

Finally, reading the Early Church Fathers helps us pursue holiness and live out our faith in this world. In fact, the writings of the Fathers are slam packed with practical exhortations for how we should live. They emphasized the fact that if Christianity is true, then it should impact every single area of our life.

Particularly notable, they emphasized the social aspects of Christianity. Love of neighbor was something that the early Christians were known for. For example, one Roman historian mentions how the Christians not only don’t kill off their weak children (leave them exposed), but that they pick up the discarded babies and take them in as their own. Another example would be that the first hospital outside of the Roman Army was started by a Christian bishop, Basil of Caesarea, to care for the outcasts and the poor. The early christians were known for their peculiar ethics. As Christians today become increasingly marginalized, the perceived  peculiarity of our ethics will increasingly make the writings of the Fathers helpful for us as sources of encouragement.

Jon English Lee and his wife, Rebekah, have three sons: Jonny, Jack, and Graham . The Lees live in Montgomery, Alabama where Jon English serves at Morningview Baptist Church and Cornerstone Classical Christian Academy. He has earned an undergraduate degree in Microbiology from Auburn University Montgomery and a Masters of Divinity from The Southern Baptist Theological Seminary. Currently, he is pursuing a PhD in Systematic and Historical Theology from SBTS. Jon English is a member of the Evangelical Theological Society and the North American Patristics Society. He is the author of several journal articles for such publications as The Churchman, Puritan Reformed Journal, and the Founders Journal.